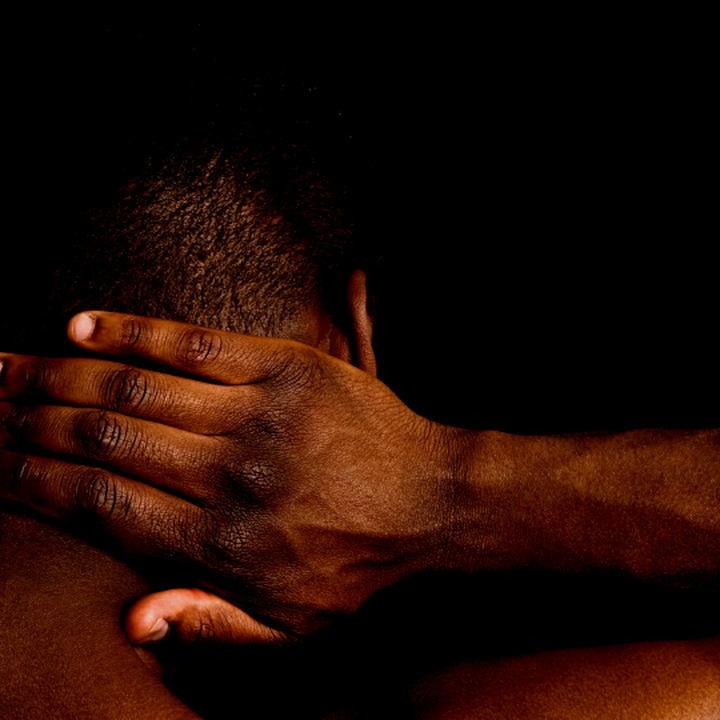 The way home is a desolate road
through the desert. Only my driver and I
roll through the noonday heat. Ahead of us,
the air shimmers. Then out of a cloud
of dust, a man runs up behind us.

Emily Ruth Hazel explores the human experience, beyond the labels, of an unnamed man in this beautiful, thoughtful poem responding to Acts 8:26-40 and Isaiah 56:3-5.

3 ¶ Neither let the son of the stranger, that hath joined himself to the LORD , speak, saying, The LORD hath utterly separated me from his people: neither let the eunuch say, Behold, I am a dry tree. 4 For thus saith the LORD unto the eunuchs that keep my sabbaths, and choose the things that please me, and take hold of my covenant; 5 Even unto them will I give in mine house and within my walls a place and a name better than of sons and of daughters: I will give them an everlasting name, that shall not be cut off.

From the Artist
Curious to explore a Black perspective within the Middle Eastern context of the Bible, I tagged along on the spiritual journey of an Ethiopian eunuch who has an unexpected encounter returning from a pilgrimage to the Jewish Temple in Jerusalem. When I chose to join the conversation between Acts 8:26-40 and Isaiah 56:3-5, I had to befriend my discomfort. [...] Read More

Curious to explore a Black perspective within the Middle Eastern context of the Bible, I tagged along on the spiritual journey of an Ethiopian eunuch who has an unexpected encounter returning from a pilgrimage to the Jewish Temple in Jerusalem. When I chose to join the conversation between Acts 8:26-40 and Isaiah 56:3-5, I had to befriend my discomfort.

In the past, I’d heard the story in Acts 8 held up as a model of how to encourage religious conversion, or else framed as an example of acting in faith by taking a God-directed detour that may not make sense at first. While stories can be used to underscore a point, I’ve become more interested in engaging with stories as windows into the complex, nuanced lives of fellow humans—as invitations that allow us to connect more deeply with our shared humanity. I’m fascinated by how storytelling can powerfully shift the way we see God in ourselves and in each other.

As I had yet to hear the story of the eunuch’s spiritual transformation discussed with the eunuch’s point of view in mind, I decided to start there. Noticing that this character was presented as being unusual in multiple ways, I was moved to reimagine the backstory (as best I could, with all my limitations as someone living in another body, place, and time). I wanted to put words to what it might have felt like to walk in this person’s sandals. By giving this character attention, voice, and agency, I discovered another side of the truth emerging from the margins.

Steeping myself in the story, I first studied several English translations of both passages. Then, to support my reading of the biblical text, I searched for information on the implications of being a eunuch. What I found reminded me that the control of people’s reproductive rights by those in positions of power has taken many forms throughout history. My research also led me to reflect on the reality that government-sanctioned violence against people’s bodies in the name of service or protection is not merely a contemporary issue.

While I was aware that forced sterilization is an ancient practice accepted in a number of cultures—one that continues today—I was newly disturbed by what I read about genital mutilation in biblical times. I learned that young men who were selected to become court officials were often castrated. Supposedly, this was to keep them focused on their duties as civil servants and to make them more trustworthy in the presence of a queen or around a king’s harem. Because this surgery was performed before puberty, eunuchs’ physical development was stunted and their hormones and health were permanently affected.

I’m grateful I came across Peterson Toscano’s illuminating article “The Mystery of the Ethiopian Eunuch,”* which helped me to understand the cultural context better and to identify with the eunuch myself. Aside from being Black, single, and childless, I could relate to the theme of socialized “otherness” based on my countless experiences with living between worlds culturally and with people calling attention to the ways I don’t fit societal “norms.” Another layer of the story that began to resonate with me was the way traumas fracture one’s relationship with one’s body and create disconnection from one’s feelings, diminishing a person’s sense of humanity. Because I see the eunuch’s journey as ultimately being one of healing and restoration, I felt that it was vital to infuse the story with physicality and emotional awareness.

I was also intrigued by how the social construct of gender factors into this story about a person whose identity could be perceived as ambiguous. This sparked me to shake up some stereotypes as far as how traits such as courage, strength, leadership, and vulnerability are often conveyed in our idioms and cultural imagination as being strictly “masculine” or “feminine” rather than simply “human” qualities. (Thank you, Glennon Doyle, author of Untamed.)

As I pondered the account in Acts 8, I noted that the eunuch isn’t named but is instead referred to categorically by nationality, physical/ability difference, class, and occupation. I realized it was common for the writers of biblical texts to use such demographics (in lieu of names) to describe characters who appeared only once. Still, it spurred me to consider how the decision of whether or not to include a person’s name can shape our perception of who is central to the story and who is a minor character. I saw ties between history and current events. Who is important enough to be mentioned as a unique individual? When some people are left anonymous, who does this protect, champion, or foreground? In my version of the story in Acts 8, even though some names were stated in the biblical text or could be inferred, I chose not to reference any of the characters or writers by name as a subversive way of treating everyone with the same degree of respect.

* Grateful acknowledgment to Peterson Toscano for background and inspiration: http://www.meetinghouse.xyz/everything/2017/3/23/the-mystery-of-the-ethiopian-eunuch

Biography
Emily Ruth Hazel is a poet, writer, and cross-pollinator who is passionate about diversifying the audience for poetry and giving voice to people who have been marginalized. Selected as the Honorary Poet for the 25th Annual Langston Hughes Community Poetry Reading in Providence, Rhode Island, she presented a commissioned tribute to the Poet Laureate of Harlem in February of 2020. She is a two-time recipient of national [...] Read More

Emily Ruth Hazel is a poet, writer, and cross-pollinator who is passionate about diversifying the audience for poetry and giving voice to people who have been marginalized. Selected as the Honorary Poet for the 25th Annual Langston Hughes Community Poetry Reading in Providence, Rhode Island, she presented a commissioned tribute to the Poet Laureate of Harlem in February of 2020. She is a two-time recipient of national Dorothy Sargent Rosenberg Poetry Prizes and was awarded a National Endowment for the Arts Fellowship for a residency at The Hambidge Center in 2014. Her chapbook, Body & Soul (Finishing Line Press, 2005), was a New Women’s Voices finalist. Emily’s work has appeared in numerous anthologies, magazines, literary journals, and digital projects, including Kinfolks: A Journal of Black Expression and Magnolia: A Journal of Women’s Socially Engaged Literature. Her poetry has also been featured on music albums, in a hair salon art installation, and in a science museum exhibition.

Emily has written more than twenty commissioned works for organizations, arts productions, social justice projects, and private clients. Currently, she is developing several poetry book manuscripts and writing lyrics for an original musical inspired by the life of the extraordinary singer and Civil Rights icon Marian Anderson. A graduate of Oberlin College’s Creative Writing Program and a former New Yorker, she is now based in the Los Angeles area.