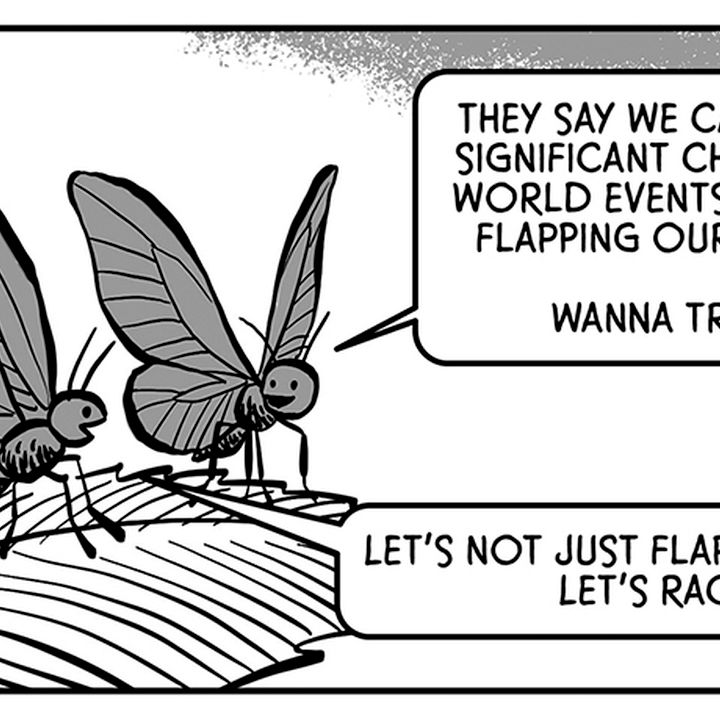 Cartoonist Drew Dernavich explores chance, fate, and absurdity in this work that he created in response to Ecclesiastes 9:11.

11 ¶ I returned, and saw under the sun, that the race is not to the swift, nor the battle to the strong, neither yet bread to the wise, nor yet riches to men of understanding, nor yet favour to men of skill; but time and chance happeneth to them all.

From the Artist
I have had different perspectives on the apparent fatalism in this verse. The idea that time and chance are stacked against persons ... Read More

I have had different perspectives on the apparent fatalism in this verse. The idea that time and chance are stacked against persons of strength and speed and wisdom does not particularly bother me…when it represents other people. I can take a certain delight in the uncertainty of outcomes when I have no stake or interest in someone else’s success (to my shame, I suppose). However, when I’ve fancied myself as being particularly talented or deserving, the fact that my odds are seemingly no better than a roll of the dice has felt like a cosmically offensive and unjust idea.

Reading this passage makes me ask, “is it even good to be skilled or intelligent?” The writer of Ecclesiastes makes these gifts seem a lot less appealing. And Paul doubles down on this concept in his first letter to the Corinthians, writing that “God chose what is foolish in the world to shame the wise; God chose what is weak in the world to shame the strong” (1 Cor 1:27). Seriously? Can we not have wisdom without shame? And yet, I am relieved to think that God takes pleasure in upending the laws of nature, in which the powerful perennially dominate the weak, and the intelligent manipulate society for their own benefit. Trusting the unknowable ways of God instead of our own power is what Henri Nouwen called moving from “false certainties to true uncertainties.” It is what we must do, no doubt. But it is challenging.

The phrase “time and chance” reminded me of the so-called butterfly effect, the theory which holds that small changes in one area of a complex system can drastically effect conditions in another: a butterfly flaps its wings in the Philippines, causing a tornado in Arkansas. The idea that one could potentially trace the steps in this chain of events is fascinating, and made me think: when the “race is not to the swift,” is it because of God’s direct intervention, or is it because of a complex chain of material events – or are they the same thing? The poetic and absurd possibilities inherent in this idea sparked my imagination. My response to this verse, then, was to tease those out in the form of a short graphic narrative.

Biography
Drew is best known for being a cartoonist for The New Yorker magazine. A regular contributor with over 250 cartoons published, his ... Read More

Drew Dernavich is best known for being a cartoonist for The New Yorker magazine. A regular contributor with over 250 cartoons published, his woodcut-style drawings are among the most instantly recognizable in the publication, and he is a winner of the National Cartoonists Society’s “Reuben Award” as the country’s best gag cartoonist. Drew’s first children’s picture book, “It’s Not Easy Being Number Three” (Henry Holt/Christy Ottaviano Books), was published in February 2016.

In addition to working on his second kids’ book, tentatively scheduled for September 2018, Drew continues to do graphic visualization work for organizations, writes for the parody project TL;DR Wikipedia, and is a member of the Ink Well Foundation, among other various pursuits.

More of his work can be found at drewdernavich.com and the blog wordspictureshumor.com.