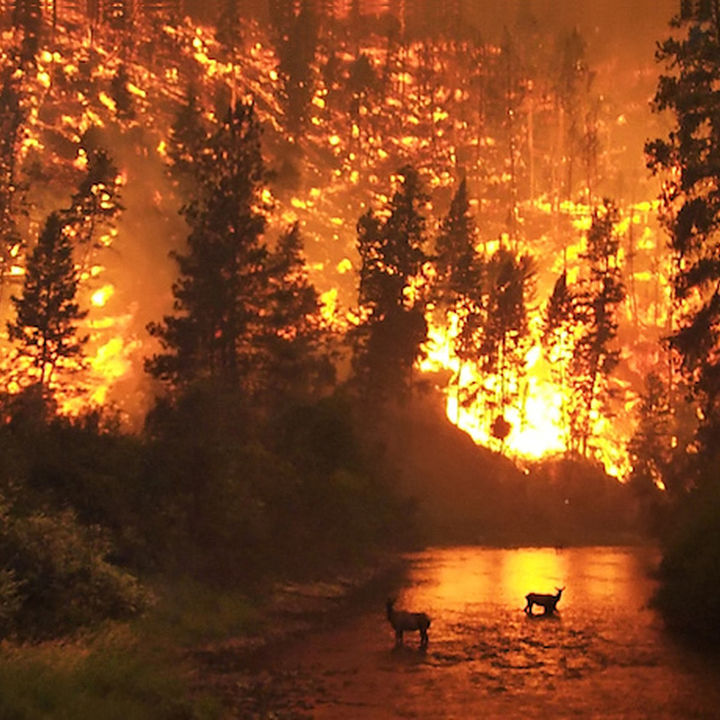 This soulful piece, composed by Nehemiah Luckett in response to Joel 2:3, produces a sound that is reminiscent of church choirs combined with Broadway.

Composed and Performed by

It should be noted that while I was ruminating on this piece many wildfires broke out around the world; from North America to Europe to Greenland. 2017 was an unprecedented year for both actual and metaphorical fires. In this piece I wanted to explore the inner monologue of the lone voice crying out in the wilderness to anyone who will listen. Inspired by Joel and T.S. Eliot's The Wasteland and in conversation with my engineer, producer and friend, Travis Tench, we landed on the concept of a solitary figure seeing this all consuming fire approaching. The sparseness of the orchestration reflects the stunning effect of this vision. Throughout the song with increasing intensity the warning bell sounds: "Fire!"

Originally from Jackson, Mississippi, Nehemiah Luckett has been composing, conducting and performing for over 20 years. He has been a featured soloist at the National Cathedral, Carnegie Hall and has performed all over the US and Europe. He has composed solo, choral and instrumental pieces. His Secular Mass (a five movement work for chorus, string quartet and oboe) was premiered in 2004. In 2015 he was commissioned by Greenpeace UK to compose Requiem for Arctic Ice: The Northernmost Part. In January 2017 his piece Kyrie 2017 was premiered at Weill Recital Hall at Carnegie Hall. He has also written two full length musicals: Hamlet: Prince of Funk (1999) based on the Shakespearean classic with collaborators Owen Beverly (Evans) and Matthew Smith and Brick by Brick (2006), based on the works of Edgar Allan Poe with collaborator, Ross Wade.

Nehemiah is the Music Director and composer for Rev. Billy and the Stop Shopping Choir and is the choral accompanist and Drama teacher for Manhattan Country School. He has a deep gratitude for Power APAC (Academic and Performing Arts Complex) in Jackson, Mississippi where he studied music and theater and his family that allowed him to dream crazy dreams.