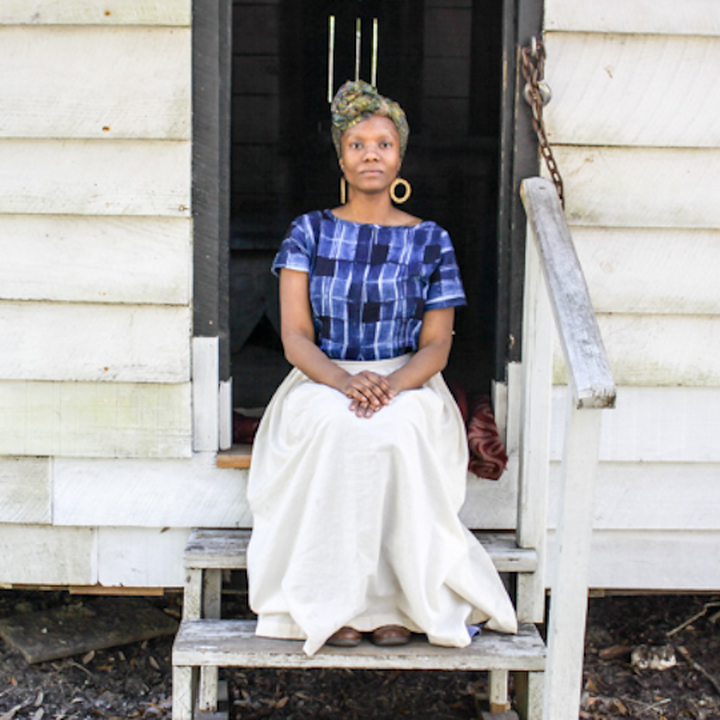 It was warm that day. Unreasonably warm for New Years in Beaufort, SC. Damp air blew in off the saltwater. The sweet, salty scent from the marsh filled everyone’s noses. It was still early as they gathered. In hundreds. Black and white. Free and formerly enslaved. The spirits of The Ones who’d been there centuries before were also present. Watching.

This rich short story by public historian and author Sara Makeba Daise provides for the reader a taste of Revelation 1:1-3.

1 The Revelation of Jesus Christ, which God gave unto him, to shew unto his servants things which must shortly come to pass; and he sent and signified it by his angel unto his servant John: 2 Who bare record of the word of God, and of the testimony of Jesus Christ, and of all things that he saw. 3 Blessed is he that readeth, and they that hear the words of this prophecy, and keep those things which are written therein: for the time is at hand.

From the Artist
Before even choosing this text, I knew that I would like whatever illumination I offered to be grounded in Womanist theology. I choose to center Black women and the people who are most marginalized in all that I do. [...] Read More

Before even choosing this text, I knew that I would like whatever illumination I offered to be grounded in Womanist theology. I choose to center Black women and the people who are most marginalized in all that I do.

The short story I told is historical fiction, based on real-life events in my hometown of Beaufort, SC. Black and white people gathered on New Year’s day to hear the Emancipation Proclamation being read aloud. And when I thought about Revelations and the idea around this earth-shattering message from God, I wanted to imagine a message with that level of severity being offered in real life.

I know many people think of the Bible as fiction. As a Public Historian, I know many people think of the history of American slavery as fiction. In both cases, the stories of Black queer people, trans people, non-binary people, cis women, disabled, and other marginalized folks are rarely centered. Rarely given reverence. So this was me re-imaging a story I’ve heard my parents tell countless times about free people on St. Helena Island. The idea that the message, and the messenger, and those who received the message were all blessed. And that this message would change the world.

I believe liberation is possible.

I believe Heaven on Earth is possible.

I believe that those who came before us are waiting for us to remember the Love and Light we come from.

Sara is a Program Assistant for The Charles Joyner Institute for Gullah Geechee & African Diaspora Studies at Coastal Carolina University.

She was one of the 4 original Interpretive Aides at Mcleod Plantation Historic Site in Charleston, SC when it opened to the public in 2014. She is a living historian with the Slave Dwelling Project. She is also a Digital Archivist for Real Black Grandmothers, an online archive centering the stories of Black Grandmothers throughout the diaspora.

A native of Beaufort, SC, She earned her B.A. in Communication with a minor in African American Studies from the College of Charleston, and she received her M.A. in Public History from Union Institute & University. Sara is one of the 2018 recipients of the Brian Webb Award for Outstanding MA Thesis in History & Culture.