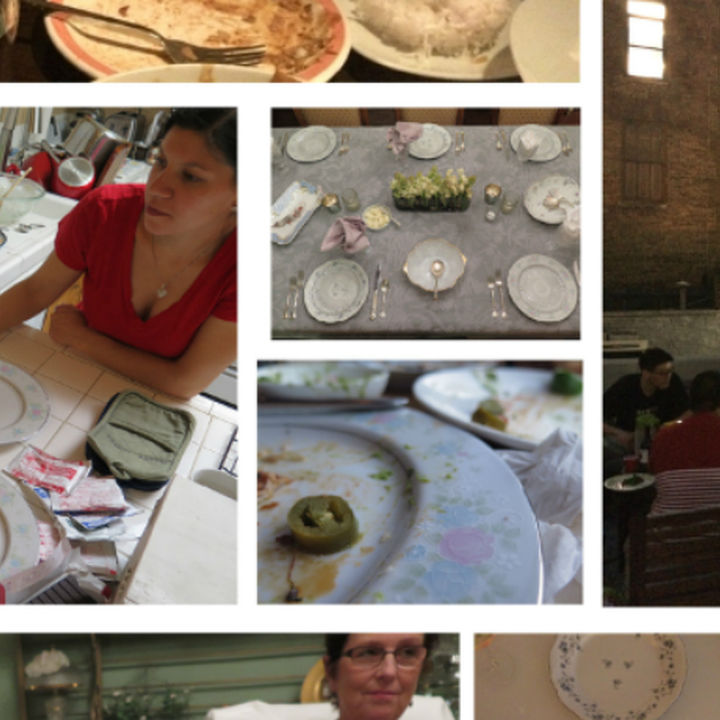 This post features the final update from Melissa Beck regarding her projects as a 2015 Artist in Resident.

View Melissa's first, second, third, and fourth posts to follow the development of her 2015 Artist in Residence project.

29 And Aaron shall bear the names of the children of Israel in the breastplate of judgment upon his heart, when he goeth in unto the holy place , for a memorial before the LORD continually.

30 ¶ And thou shalt put in the breastplate of judgment the Urim and the Thummim; and they shall be upon Aaron’s heart, when he goeth in before the LORD : and Aaron shall bear the judgment of the children of Israel upon his heart before the LORD continually.

20 Hear counsel, and receive instruction, that thou mayest be wise in thy latter end. 21 There are many devices in a man’s heart; nevertheless the counsel of the LORD , that shall stand.

7 ¶ For the Lord GOD will help me; therefore shall I not be confounded: therefore have I set my face like a flint, and I know that I shall not be ashamed.

2 Looking unto Jesus the author and finisher of our faith; who for the joy that was set before him endured the cross, despising the shame, and is set down at the right hand of the throne of God.

Remember those plates?…The ones that were made to last a lifetime, but had been turned into something disposable. This piece highlighted how we often break our own commitments, causing damage to relationships and turning what was meant to last forever into something temporal. After I did that piece in response to Romans 7:15, I realized how often we see the Bible in this way. It becomes this book focused on what our faults are, on what we should and shouldn’t do. While the Bible is a guide for morals, that is just a fraction of the picture. The real meat of the story is this relationship; a dynamic one that continues forever.

At the crux of this faith is a relationship with Jesus Christ. He is a person we serve, worship, commune with, pray to, wrestle with, and were made by and for. Each person knows relationship. Even if all we know are broken ones, we know the desire for a whole one because we’ve experienced brokenness. Even if we are the ones who break our own commitments and become disloyal to the ones we intended to be loyal to, a fixing of this is still possible, but not by us.

Over the past few months, I had meals with friends and family using these plates. We met at restaurants, homes, one on one, in groups…sometimes planned, sometimes spontaneous. Each time, we each ate from these plates. My friends were given the plate to keep after our time together. However, in the end, it’s not about the plates. At every meal we forgot about the plates because we were sharing life through stories, listening, laughing… which is how it’s supposed to be. The plates are merely a backdrop for life, for interaction, essentially an experience to take place and relationships to be built.

Reflective of God’s redemption of us, these plates were rescued and elevated and restored to what they were originally intended for. Like any meal, they’re not meant to stand on their own. Other elements such as food, forks, tables, people, talking, listening and orchestration of time and place are what truly make the dishes the beautiful things they are meant for. The whole is greater than the sum of its parts. Just as these dishes cannot be what they’re fully meant to be without a communal gathering, we humans cannot be fully alive without each other and our God, who is the author of everything in our lives.

“Pay attention to advice and accept correction, so you can live sensibly. We may make a lot of plans, but the LORD will do what he has decided.” Proverbs 19:20-21 CEV

Decision Threads is a video piece I worked on each season this year. Certain elements from Exodus 28 guided the aesthetics of the piece. Aaron was called to be a decision maker for the Israelites. The four colors of yarn used to make his garments were blue, scarlet, purple and gold. While these colors were made to be bold, in the video they are subtle, barely noticeable. Making decisions can be like that. While they can have a great impact on our lives, we are often making subtle decisions.

“It’s a video that looks at the subtleness of decisions. In the making and breaking of our commitments, we are essentially making a million little decisions. Often those decisions are so subtle we don’t even realize them until we find ourselves somewhere we never thought we’d be in life. Those decisions weave a thread through our lives everywhere we go, in the people and places we interact with, the work we do, the attitudes we have… Sometimes it’s a lot of pressure to decide if we should do this or live here or take this job or…”

However, I realized that we don’t have to make decisions alone and ultimately it’s not us who are creating the results. Even when we do have to make a final decision on our own, it’s often better when informed by someone trustworthy. Decision-making is just as much a solo thing as it is communal. Like the meals we share, this life is far less about the individual or about perfection and so much more about community, relationships and life interactions between people and with our Maker to see things redeemed…even if all we see is brokenness, failure, a tangled mess, lint or dirty dishes.

Melissa Beck’s work explores elements of the everyday redefining the familiar in unexpected ways so as to reawaken our eyes to what is often overlooked. She is an emerging artist living and working in Brooklyn, NY. Melissa grew up in Los Angeles and San Diego. She achieved her MFA in sculpture at Pratt Institute and graduated in 2013. Her dream is to create large-scale public artwork and to become an art professor. When Melissa isn’t making art, life for her consists of freelance sewing and display work, nanny-ing, dancing, laughing with her friends, visiting the California sun and taking life one step at a time with her Creator.

Most Sparks for Exodus

We The People USMNT Podcast