They arrived at Ephesus, where Paul left Priscilla and Aquila. He himself went into the synagogue and reasoned with the Jews. When they asked him to spend more time with them, he declined. But as he left, he promised, “I will come back if it is God’s will.” Then he set sail from Ephesus. 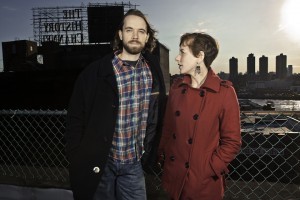 It’s been a real joy working on these since the last demo, as I’ve recorded four amazing musicians, replacing the synthetic instruments with new life! On violin is Ariana Rosen; on cello, Meaghan Burke; on soprano and alto saxophones is Kevin Gosa; and on Trombone, James Hall. I recorded these in four separate sessions in my home in Beacon, NY, or in NYC in the artists’ apartments. It was the first time I’ve recorded in this way and I loved the process. Surely, this is a friendly and sane way to make an album. To the future!

“But you, Bethlehem Ephrathah,
though you are small among the clans of Judah,
out of you will come for me
one who will be ruler over Israel,
whose origins are from of old,
from ancient times.”

The bulk of this song was written a few years ago before we had kids, imagining a small Bethlehem embracing this news, but it never came into focus until jamming with my then 20-month old Walter. I guess it takes playing with someone small to finish a song about smallness.

“…Yet I hold this against you, [Ephesus]: You have forsaken the love you had at first….”

This song takes the above passage from Revelation, written by the Apostle John as a warning to the city of Ephesus, and combines it with historical information that my wife Emily and I learned while visiting Ephesus on our honeymoon. The shore line used to be close to biblical Ephesus, but as the water receded, the city moved with it, faithfully preserving what was left behind as ruins in the dirt.

This piece also draws from the books of Acts, Ephesians, and historical accounts. It imagines Ephesus loving the years when Paul lived there, when the city was alive, and then missing his presence dearly as he traveled away. The city pines for his letters and news of his safety and potential return.

“…Then I passed by and saw you kicking about in your blood, and as you lay there in your blood I said to you, “Live!” I made you grow like a plant of the field. You grew and developed and entered puberty. Your breasts had formed and your hair had grown, yet you were stark naked…” (excerpt)

This was the first piece written for this “Cities” project, many years ago as a piano and vocal solo I used to perform in clubs in NYC. It launched this whole idea of personifying biblical cities. What a startling section of Scripture, of God speaking to Jerusalem as a lover who has betrayed him. Of all of the pieces in this cycle, this piece has the most lyrics taken straight from the Bible.

“Then the Lord said to Joshua, “See, I have delivered Jericho into your hands, along with its king and its fighting men. March around the city once with all the armed men. Do this for six days. Have seven priests carry trumpets of rams’ horns in front of the ark. On the seventh day, march around the city seven times, with the priests blowing the trumpets. When you hear them sound a long blast on the trumpets, have the whole army give a loud shout; then the wall of the city will collapse and the army will go up, everyone straight in….”

If you are a city with emotions, how does it feel to hear you will be captured, devoted, cursed, redeemed? It was curious to imagine this, to dwell on Jericho’s collapse, and then imagine how the city might feel to know that one part of its city, a part it was sure God would hate, God loved. From this small part, comes the Savior of the world.

“Then I saw “a new heaven and a new earth,” for the first heaven and the first earth had passed away, and there was no longer any sea. I saw the Holy City, the new Jerusalem, coming down out of heaven from God, prepared as a bride beautifully dressed for her husband. And I heard a loud voice from the throne saying, “Look! God’s dwelling place is now among the people, and he will dwell with them. They will be his people, and God himself will be with them and be their God. ‘He will wipe every tear from their eyes.There will be no more death’ or mourning or crying or pain, for the old order of things has passed away” (excerpt)

This beautiful text has the new Jerusalem personified, beautiful and “coming down out of of heaven.” At the same time it’s also told from Adam and Eve’s point of view, remembering the garden and the “tree that had them damned” and feeling the relief of regret being washed away. We look through their eyes and see heaven for the first time; we are baffled and mystified by the big and small things we notice. We see Christ and feel the surrounding beauty of his love and this New City.

Follow the development of Spark & Echo Band’s project by reading this in addition to their first, second, and third posts as a 2015 Artist in Residence.