Responding to Galatians 4:21–5:1, author and 2019 Artist in Residence Lancelot Schaubert presents the first of his four short stories that will ultimately become chapters in the third novel within his White Trash Magic trilogy.

These things are being taken figuratively: The women represent two covenants. One covenant is from Mount Sinai and bears children who are to be slaves: This is Hagar. Now Hagar stands for Mount Sinai in Arabia and corresponds to the present city of Jerusalem, because she is in slavery with her children. But the Jerusalem that is above is free, and she is our mother. For it is written:

you who never bore a child;

shout for joy and cry aloud,

you who were never in labor;

because more are the children of the desolate woman

than of her who has a husband.”

It is for freedom that Christ has set us free. Stand firm, then, and do not let yourselves be burdened again by a yoke of slavery. (NIV) 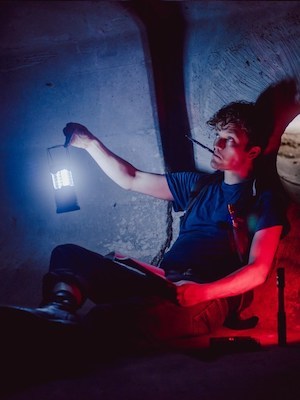 This story marks part one of a serialized work in four parts, all of which will eventually nest itself within a larger novel I’m loosely calling The Moon Boys, part one of the Bell Hammers (or “White Trash Magic” trilogy). The story features two boys struggling between the son of the flesh and the son of the spirit, the Wordsworth / Coleridge dichotomy, the wonder of the mundane and the wonder of the fantastic, and the great modern split between urban and rural with families ties barely holding it all together. In this story, you’ll get a flavor for the initial magical appeal as well as watch me t-up some of the coming themes in the other three pieces.

Note: These stories contain strong language and may not be suitable for all audiences.

Read Lancelot’s second and third posts to follow the development of his 2019 Artist in Residence project.