Spark+Echo Artists in Residence spend a year developing and creating a major work in response to Scripture. Click on their names to view their projects. 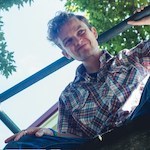 Born and raised in Southern Illinois amid four generations of carpenters (and named either after Lancelot the knight or Lancelot the soap opera character, depending on which parent you ask), I moved to Joplin, Missouri for college where I did internships in San Diego among young artists and in Detroit — Dearborn — where I taught English and citizenship to Arab immigrants. I auditioned for some TV shows, helped internationals feel at home, and started an artist support group with Mark Neuenschwander, the photographer.

In college, I majored in rhetoric and minored in mythology and ancient literature. Somewhere in there, I fumbled along trying to woo the grooviest girl in the world to marry me. She was from Ferguson, Missouri.

Now, we live in New York City. In addition to writing and producing, I work for ACT International helping artists in the city think cleverer, feel deeper, and act truer. Sometimes I give them grants to jumpstart their careers. Most of the time I just cook them food, let them crash at my place, and hold them when NBC rejects their screenplay or only five of their paintings sell at their gallery. If that’s you, I’m in your corner.

I’m hard at work on what will be my first published novel, but I’m also quite dangerous with a nail gun. Ask me about the squirrel sometime.