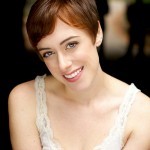 Emily Clare Zempel (Theatre) is an actor and musician based in New York City. She received her MFA in acting in 2007 from Brooklyn College, and has since been acting both in NYC and regionally. Favorite credits include Katherine in Love’s Labour’s Lost at Milwaukee Shakespeare, Ophelia in Hamlet at Baltimore Shakespeare Festival, Beatrice in Much Ado About Nothing at Roosevelt Shakespeare, and Wittenberg at Rep Stage, which was nominated for a Helen Hayes Award. She plays bassoon, ukulele, guitar, clarinet, and other assorted toys in Spark & Echo the Band and has co-created the original play Esther.