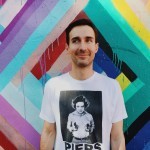 Aaron Beaumont (Multidisciplinary) makes music for stage, for screen, and for practically any other thing, whenever possible. As a writer and performer, he’s shared his work in wide-ranging venues from the Sziget Festival in Budapest to KCRW Santa Monica to Theatre 80 in the East Village to the main stage of the West Hollywood Carnaval. L.A. Weekly wrote that Aaron’s music brings “a new life to the ancient music-hall/pop piano-man tradition, with clear-headed songs of genuinely witty lyrical oomph and, most of all, a historically informed musical depth – all delivered with style, grace, wit and elan, of course.”

Aaron also works as a composer and producer for the Gregory Brothers, whose original music has earned them a gold and platinum record and nearly one billion views on YouTube. He co-founded SongLab and currently serves as co-chair of the Carnegie Hill concert series in New York, featuring leading interpreters of classical and New Music from around the globe. In his spare time, Aaron enjoys playing the piano, eating, making coffee, drinking coffee, going for brisk walks, being near coffee, and writing brief autobiographical sketches in the third person.

He was also an Artist in Residence for Spark+Echo Arts in 2017.